We LOVE our spinach smoothies! 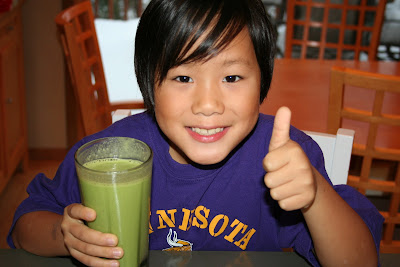 This is a spinach smoothie household.  We love them!  You may think it sounds gross but don't knock it until you've tried it.

Why do the kids like them?  The taste is amazing.  Actually, the spinach taste fades away and you really just taste the other ingredients.

Watch out!  Spinach smoothies are addictive.  In addition to the taste, it's a great way to load up on a nutrient-dense food first thing in the morning.

As we've been playing with making spinach smoothies, we've all stumbled across our own favorite variations.  I will eventually share all of them with you, but here is Noah's spinach smoothie recipe.  This version is very kid-friendly!

Spinach Smoothie by Noah from A Little Spinach

Blend all together.  This makes one large glassful.

*  Our tip for purchasing yogurt:  When looking for yogurt, make sure that you can read and understand all of the ingredients.  Many yogurts are filled with some pretty funky stuff.

Have you ever tried a spinach smoothie?  Have your kids?  Do you think you'll give it a shot?  We triple dog dare you!